Training up the Children of the Poor 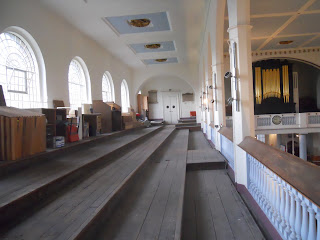 St Peter’s Church of England Primary School has its origins in the church of the same name adjacent to the school. The church was built in the 1820′s, and opened a Sunday School in 1836. To begin with the children sat around the altar and in the pew seats, but eventually they moved into three small rooms in the church building.
With the growing demand for a local day school, the Rector Rev George Ainsley purchased the plot of land between St Peter’s Church and Sutherland Chapel in Liverpool Street (now Liverpool Grove), and a building comprising of “two schoolrooms for boys and girls” was erected in the autumn of 1839. The National Society funded the project.
The object of the Schools was to “train up the children of the poor of the district in the principles of religion and good order, and to furnish them with such elements of secular knowledge as may fit them to become, in after life, honest and useful members of society.”
Like other parts of London in Victorian England, Walworth quickly developed into a populous area attracting the poorer sort of family. As the posh well-to-do people moved further out, corrupt landlords hastily converted the homes they vacated. Locks were fitted to internal doors and entire families were forced to live in single rooms.
This overcrowding eventually brought about the slum dwellings, which was the cause of much disease in the area, but supplied the school with hundreds and hundreds of pupils from the immediate locality.
Like today, school began at nine o’clock with registration followed by lessons. A two-hour lunch break commenced at mid-day, before the children returned for the afternoon. During the summer months, school finished at five o’clock, and an hour earlier in the winter. Unlike today, the school week did not finish on Friday afternoon – Saturday morning was work as usual. It was years later before people enjoyed a two-day weekend!
Holidays were also a little bit different to what today’s children enjoy, being two weeks at Christmas, only two days at Easter, one week at Whitsuntide and two weeks in the summer. In addition the children were given a day off on Queen Victoria’s birthday and the anniversary of her ascension to the throne (28 June,) as well as every Wednesday afternoon.
Every Monday morning each child paid one penny towards school funds. The boys and girls were separated from each other and even had to use different entrances! Children began St Peter’s School at five years old, and left when they were fourteen, usually to start work as an apprentice, or if you were a girl, take on a menial job.
Later, in July 1851, another Rector of the church, the Rev. Francis Statham, laid the first stone of a brand new St Peter’s School building in Shaftesbury Street (the present Aylesbury Road). It was opened the following year. The girls were taught in the large upper room and the boys met in an identical room below. A foul smelling cowshed stood next door.
This structure lasted until 1905 when it was demolished to make way for the Octavia Hill Estate. One very influential character of the time was the Rev. John Horsley who secured the deal that would give St Peter’s its present school building in Liverpool Grove.
In the early1990s the building was re-modernised and extended. The Nursery building was added in 2003.

Jack McInroy © First published at http://stpeterswalworth.co.uk/history/
Posted by jack at 13:32