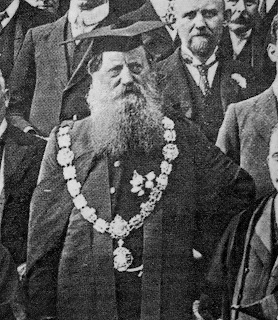 No picture of St Peter’s School in the Victorian age would be complete without making reference to the Rev. John W. Horsley. The 48 year old Rev. Horsley arrived at St Peter’s Church as the new Rector in January 1894. He was six feet tall and had had a beard since he was 16. He immediately created an impression in the area, and is almost singularly responsible for opening up the crypt of the church to community activities, turning a disused graveyard into a park and later securing the deal that would give St Peter’s its present school building in Liverpool Grove.


In 1904 Rev. Horsley became the Canon of Southwark and even held the position of Mayor of Southwark for a year in 1910. Wherever he was stationed in his professional life he associated himself with the local government of the town, gaining much influence in a range of projects for the improvement in the conditions in which the poor lived.

With his long beard and his warnings to drunkards to turn away from the demon drink, Horsley must have reminded people of an Old Testament Prophet. But there was more to him than met the eye. He was a shrewd character, and enjoyed a good deal of fun with everyone as well as winning the affection and respect of everybody he worked amongst. 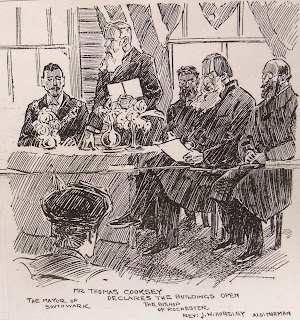 Rev Horsley, 2nd from right, at the Newington Workhouse in Westmoreland Road

He was a regular visitor to the school, and eventually taught the children religious instruction daily. His keen interest in botany and zoology meant he was more than just a teacher of religious education. He specialised in Conchology, and often brought an assortment of shells from his large collection in to St Peter’s School for the pupils to study and draw. 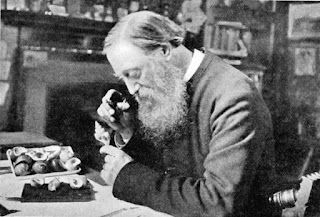 Horsley was only too aware of the difficulty many of the parents, let alone the children, had with reading and writing. Especially the poor women who worked in the local factories, and who probably never picked up a pen once they left school. He could, however, see the funny side, and compiled a folder showing the illiteracy of the parents. “And their spelling!” he bewailed, when a child was absent from St Peter’s School a slip was sent home for the parent to explain the absence. A selection of these slips in Horsley’s collection revealed that a common excuse - that of sending a child on an errand - when transferred to paper came out in a variety of ways. “To go of anarrand”, “Detain on arond”, “To get some arrants”, “To go for a reant”, “To go on an arreind”.

Other excuses included “Ceapt by his father”, “Whas kept away beCos he Wos hill”, “Very pooly so I kept him A tomb”, “BeCars He Whas to late”, “To late for Scwol”, “20 mints two late”, “Sent to mis tomkns cool for his hie is Bad”, “I will send my sun next monday if hable”, “Hat ome be cose he Was so hill I ad to give hin son meesen [medicine],” “He plad the truent,” and so on. The prize however, must go to the mum who wrote “bil is got the beleak” which even the experienced reader might not realise was young William suffering a gastric inconvenience – bellyache!

One of Horsley's pastimes was the menagerie he kept in the back garden of the Rectory, which, in fine weather, never failed to attract bands of small children and curious grown ups. The animals included a colony of guinea pigs which were contained inside a moveable wire enclosure. This was regularly repositioned across the lawn and (in effect) worked as a lawnmower doing wonders for the quality of the grass. Other creatures were loaned to the Rector for periods of time making up a charming miniature zoo. 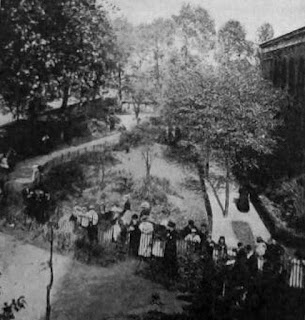 Among the feathered varieties on display were a pair of owls kept in a cage beneath the shade of a tree, some jacobin pigeons in another cage, and some cockatoos. But it was a handful of little monkeys of different species that were the main attraction. Kept on long chains so they could roam about without escaping, there was always lots of interest in them, especially when they got entangled and a fight ensued. Named Jimmy, Joe and Baby, they brought hours of fun to the little ...monkeys of St Peter's parish.

The menagerie was fondly remembered long after Canon Horsley's demise. Even today, a century later, there is still a part of the church grounds that is known as 'The Monkey Garden' or 'the Monkey Park.' 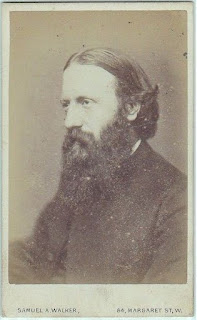