A Past Pupil of St Peter's School 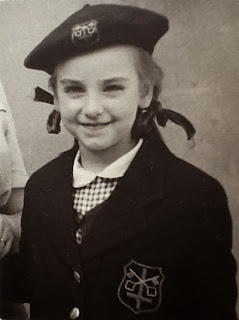 It is always a joy to hear from former pupils of St Peter's School in Liverpool Grove, Walworth. Especially those who attended the school many decades ago.

Heather Randall was born during the Second World War in May 1944 and lived in Walworth until she was only six when she went to live in Dover, Kent. From there she moved to Ipswich in Suffolk, and when she got married in 1967 she emigrated to Spain and has lived there ever since.

She contacted St Peter’s to thank the school, and particularly those long departed teachers of her time “for teaching me to read and write and to be able to manage some basic sums. It was my first seat of learning and you gave me a very good start in life for future studies. I went on to read Law at Madrid University and obtained my Degree in 1990 as a mature student.”

Heather is writing her autobiography for her children and grandchildren, and wants to include some details of the school from around that time. She enclosed a wonderful photograph of herself looking resplendent in her St Peter’s School uniform.

Her earliest years were spent living above the tailor’s shop at 291 Walworth Road, where her father was the manager. The shop is now Boots the Chemist. She remembered there was a church building on the corner of East Street and Walworth Place, close to her back yard. This was St Mark’s parish church, which was later demolished in the 1950s.

“I am very pleased and honoured that Mrs Copeland [the present Head Teacher] wishes to include my photo and story in your school newsletter. I have seen the school’s website and see that the children are involved in many interesting activities and all appear to be very happy. Congratulations on the good work!”

“My grateful thanks for giving me such a good start towards my further school years after leaving St Peters. I am sure that if I had not received such dedication it might have been a different story.”

The Admissions Register for St Peter’s School records that Heather was admitted to the school just before her fifth birthday on 2nd May 1949. Her final day at the school was Friday 8th September 1950 before her move to Dover.

She was at St Peter’s School for just four terms until she was a six year old, yet her brief stay made a deep impression on her, and may have contributed to the shaping of her character by the ‘good start’ she had.