What mean these stones?

And those twelve stones, which they took out of Jordan, did Joshua pitch in Gilgal. And he spake unto the children of Israel, saying, When your children shall ask their fathers in time to come, saying, What mean these stones? Then ye shall let your children know, saying, Israel came over this Jordan on dry land. For the LORD your God dried up the waters of Jordan from before you, until ye were passed over.
Joshua 4 v 20-23


Not so long ago I was given the task of opening a forty year old time capsule that had been hidden behind the foundation stone of a church in Camberwell. The contents of the tin tube, tightly rolled up and forced inside, were impossible to remove without causing actual damage. And when we did manage to yank everything out we were rather disappointed, and felt an opportunity had been wasted by the folks from 1971. The most interesting item was a handwritten list of names of the members, many of whom are still attending the same church and others who had passed away.

A photograph would have been nice, or an audio cassette recording of some hymn singing and a sermon or some people speaking about their experiences. Instead we found some gospel tracts and the (still) current basis and constitution of the church.

Time capsules are deliberate attempts to record a moment in time, a chance to reveal something of the past to a future generation. Perhaps we opened this one too soon – the wall had been demolished to make room for a new doorway and the marble panel resited a few yards away – but even left for another forty years the frustration would probably be the same.

Then there are things that get mislaid and lost in the mists of time only to be discovered decades or even centuries later. Things forgotten about or not known of, when unearthed bring surprise, joy, wonderment and sometimes great reward. In the Summer I met Mr Yang, the farmer who discovered the famous Terracotta Warriors. Without a doubt this was one of the highlights of my trip to China. Whilst digging a well in a field in 1974 he exposed some moulded heads below the red soil which turned out to be a whole army of clay sculpted lifesize statues – two thousand of them! Many of them were broken in pieces and have since been painstakingly put together by another army of craftsmen. The warriors were hidden away, encapsulated in soil through the sands of time. A proper time capsule.

Absolutely thrilled to bits by my encounter with Mr Yang, I greeted him, gripped his hand and shook it, slipping him a few banknotes in the process. Despite making one of the most important archaeological discoveries of the twentieth century, Mr Yang was never fiscally rewarded for his magnificent find. It is only in recent days that he has made a few yuen signing books.

The excitement of a ‘find’ is why metal detecting and treasure hunting is so popular. I once took a group of St Peter’s schoolchildren down to the Thames shore to do a bit of mud larking and we brought back all sorts of interesting items ranging from an old ginger beer bottle, a piece of driftwood with a pulley attached and a Victorian industrial brick with the manufacturer’s name and the date indented into it. Once the objects were cleaned and dried they made for a very interesting display in the classroom. 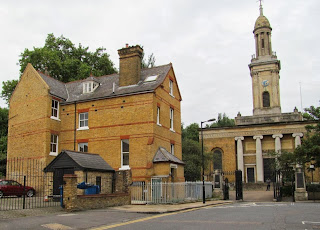 Jonathan and Julie Myerson bought their present house – the former St Peter’s Rectory in Liverpool Grove – following the controversial sale of the Church Commissioners property in Walworth in 2006. For a hundred and twenty years this large residence had been the living quarters of the Rector, or the Vicar of the local parish church that stands just a few yards away. Men such as Canon Horsley in the 1890s and early 1900s, John Markham during the Second World War and Harvey Hinds in the 1960s all lived there.

But it was only when builders were demolishing an unused chimney stack to create extra space that they were able to appreciate a history of the site that dated back even further.  One particularly tricky piece of masonry that required cautious removal was the hearth stone beneath the fire place in the kitchen. This was carefully prised up and duly set aside for salvage. However, when the slab was flipped over, they discovered something inscribed on the reverse. The date “1839" and "Rev.d George Ainsley” followed by another name “William K. Cowley, Church Warden” were clearly visible.

What they had discovered, purely by chance, was part of the original foundation stone of the St Peter’s School, which was built on the same site just two years after Queen Victoria came to the throne. Rev, Ainsley purchased the ground, and through the aid of the National Society had the new school built. Although further schoolrooms for St Peter’s boys and girls was later erected in Shaftesbury Street (now Aylesbury Road) twelve years later, the site in Liverpool Grove continued to cater for the infants. The Infant School served the area until the building became quite dilapidated in the 1880s and it was demolished. The new Rectory was built in its place and the young pupils moved to the main St Peter’s School in Aylesbury Road, where an extension had been built. In 1905 the present school building went up. 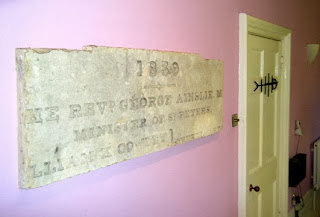 The Myersons have come to regard themselves as the custodians of the ‘Old Rectory’ site – their home – which has so much history surrounding it. In fact, they will be applying for a blue plaque to commemorate Canon JW Horsley, a previous occupant of the house from more than a century ago. Among his many innovations, Horsley set up a ‘monkey park’ in the Rectory garden, a place that brought much joy to the local inhabitants who made regular trips to his charming little menagerie. That very same garden continues to bring forth wonders, in the shape of marvelous little ancient treasures that Julie has dug up, including a silver tablespoon with Horsley’s initials JWH, and a tiny china doll which now sits on their mantelpiece. But pride of place is kept for the foundation stone of the original St Peter’s School. It’s not the Terracotta Warriors but it’s pretty impressive nonetheless. And is now mounted on a wall in the house that they feel they are taking care of for future generations.

My thanks to Julie and Jonathan Myerson
Posted by jack at 16:32