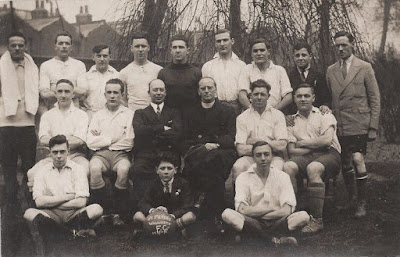 This photograph of the St Peter's Church football team has recently surfaced. The boy in the front row is holding a ball dated 1930/31 season.

I can only assume that the man in the dog collar is the Rector of St Peter's - Gilbert Spofforth Reakes - who ministry at the church lasted from 1924 until 1937. At the time of the photo he was 40 years old and was married to Kathleen. They had two children.

We will be fascinated to find out the names of the other men in the photograph, which looks like it was taken in the churchyard.