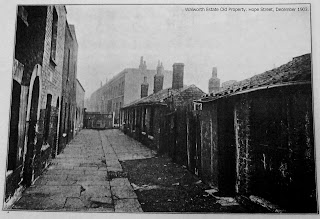 In the Victorian days it was not unusual to find twenty people living in a small house that today may be occupied by only four or five. Several families living in the same house was a major characteristic of the vastly overcrowded St Peter's district of Walworth. In such conditions ventilation was all-important, especially regarding young ones whose delicate lungs were more injuriously affected by the stuffiness of the bedroom. However, keeping the bedroom door open all night was out of the question, but it was always possible to have a window slightly open allowing air into the room. The night air was not as unhealthy as the highly polluted day air, but nothing, wrote Rev. Horsley, was as “unhealthy as the atmosphere of a closed room breathed over and over again by its sleeping inmates.”

Following his induction Horsley soon became one of the most familiar faces in the neighbourhood and regularly visited his parishioners. His advice to parents on hygiene and good health is well known, as are his labours to bring about better conditions for poor people. His answer to many local ills was to educate the people and get them to change their habits. “I visit a case of consumption, I say to myself, what else but consumption could you expect. You have caused it as much as you cause a fire when you put lighted match to paper.”