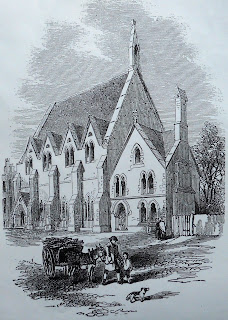 This illustration of the new St Peter’s School building appeared in the Illustrated London News on the 3rd July 1852. It was situated in Shaftesbury Street, which is now called Aylesbury Road. The present allotments on the corner of Brettell Street and Aylesbury Road is approximately where the building was positioned.

The architect responsible for the design of the Shaftesbury Street school building was Mr Henry Jarvis, who gave his services free of charge. There is a marked similarity with St John’s Church in Larcom Street, which was another of Jarvis’s designs. The Schoolmaster and Mistress lived in the house attached. On Sundays the main building was also used for divine worship.

The school comprised of two large well-ventilated and efficiently warmed rooms, measuring 15 metres in length by 8 metres wide: the boys upstairs, the girls downstairs. The Infants School until 1885 was on the site of the present St Peter’s Rectory. By the end of the 19th century, and in keeping with its surroundings, the old St Peter’s School had fallen into such a state of disrepair that plans were underway to erect a new building. This eventually took place in 1905, but only after a vast area of the local slum dwellings were cleared away to make way for nicer homes. The old St Peter’s School building stood in the way of a new street, so it was a good opportunity to relocate to its present position in Liverpool Grove. 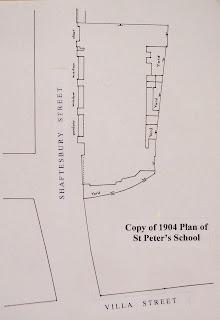 Notice the condition of the road in the top illustration. Tarmacadam was not in general use in 1852. Road surfaces were made up of gravel, crushed stones and waterbound grit. It was also forty four years before the invention of the motor car, and most vehicles were horse-drawn.