Following the death of Mr Christopher in January 1877, his widow the Headmistress to the girls, continued teaching, and remained as a tenant in the schoolhouse. The Managers of St Peter’s made it known at their midsummer committee meeting that they wanted a married couple to run the Schools. This meant re-housing Mrs Christopher and finding a suitable partnership for the scholars as soon as possible. During the interim temporary masters and mistresses came and went, some only remaining for a few days. 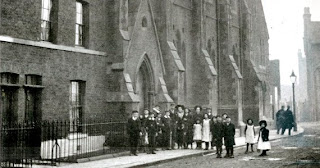 St Peter's School just before its demolition in 1905

Mr [and Mrs] William and Emily Down visited the school in September and accepted the respective Heads’ positions. Husband and wife began in earnest on October 30th 1877. The St Peter’s boys now had their fourth Headmaster in less than a year; whilst the girls were on their fifth Mistress in less than six weeks!

A little over two years later during another scarlet fever epidemic Mr and Mrs Down lost a son to the killer disease. They were half expecting it. Mr Down wrote in his brief account of 28th November 1879, “Owing to the almost sudden death of my son on Monday afternoon I did not attend for the remainder of the week.” Mrs Down also appears to have taken the sadness in her stride, “Mistress absent” she wrote, “owing to death in family.” They returned to work the following Monday. It was bitterly cold on Shaftesbury Street.

Tragedy seemed to stalk the occupants of the St Peter’s School house. Mr Church, another late Head and the first resident of the home, died whilst abiding there in 1864. In the winter of 1872-73 after six months in the house as Master and Mistress, Mr and Mrs Daniel Taylor lost two young children in quick succession to scarlet fever. After Christmas Mr Taylor recorded, “Death of my little girl during the holidays.” followed only a few days later by, “Death of my youngest child.” Mrs Sarah Taylor echoed with “Mistress absent from prayers during these four days. Illness. Death.” And “Mistress out of school during the afternoon, and one [sic] home in the morning. Domestic trouble.” Referring to the death of one’s child as “domestic trouble” may seem rather cold to some of us, but infant mortality was common in Victorian times, and mothers accepted it more readily.