Bullying of Girls by Boys 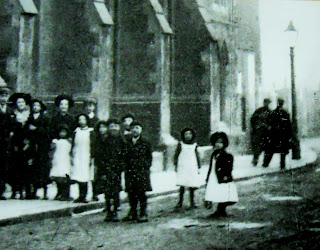 
Bullying other children and mugging is not just a recent occurrence. A recording in the St Peter's Girls School logbook for 12th April 1877 shows that on some occasions drastic measures were called for. Mrs Christopher, the Headmistress notes, “Several rough boys have all this week stopped the girls going out of school and obliged them to give up their pencils or anything else to which they take a fancy. I therefore sent to the Police Station requesting the inspector to let a policeman come round this way occasionally.”

Something similar happened during the Great Dock Strike of 1889. Headmistress Mrs Andrews wrote, “Had to let the girls go home at 4 o’clock because of a number of boys ‘on strike’ annoying the girls in the morning. Policeman stationed outside for remainder of day.”

Like the fire-fighters and tube workers today, the dock workers were striking for higher pay, and received the support of employees from other industries who also came out on strike. With nothing to do all day, some unscrupulous working boys hung around the school gates causing bother. These boys were probably 14 and 15 year old ex-pupils of St Peter’s.