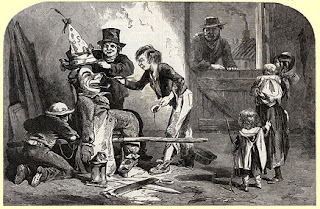 
The St Peter's Girls School logbook for November 5th 1883 reads, “Numbers poor in morning, and worse in afternoon owing to it being Guy Fawkes Day.” The Victorians did not have the access to the amount of pyrotechnics we have now, but they celebrated Guy Fawkes Night with bonfires and firework parties in remembrance of the foiling of the gunpowder plot and treason of 1605. For a while in the nineteenth century the children were officially given the afternoon off school.

A few days later the “School Board Officer found many children away from school looking after the guys in the street during the week.” Guying is not as common a sight today, but in the past, at the end of almost every street you would find groups of children parading an effigy of Guy Fawkes made out of old clothes and newspapers. This was an exciting time of the year for the poor youngsters who would ask passing adults, “A penny for the guy?” It was an easy way for them to make a little bit more money.

The School Board Officers worked for the Local Education Authority, and part of their job was to look out for children playing truant or not attending school. Parents would be in a lot of trouble if their child continued to be absent without a proper reason.