The St Peter’s School logbooks of the Victorian era do not reveal a great deal about corporal punishment. Cases like the following from 31st January 1878 are few and far between. “Louisa Payne was sent out of her class by the teacher, and her mother very impudently came into the room and said, “her child should not have the cane but that I should cane her (the mother) first”.”
Another example from the Boys logbook of 11th September 1877, “Had to punish a boy named Walker for repeated laziness and troublesome conduct. [He] refused to hold his hand out when requested and as this was not the first instance of insubordination I deemed it necessary to make an example of him and therefore did not finish with him until he held out his hand. In the afternoon his father and another man called and informed me that the boy would be taken away and I should “hear further of it”.”
Far from being concerned, Mr Meech was only too pleased to see the back of the boy, adding “As I understand, the boy is very sullen and disobedient. This is decidedly the best thing that could have happened.”
One other example shows that being late for school earned you more than a mark in the late book. You may also have received a mark on the backside or the hand! This from19th June 1885. “A few boys were caned for coming habitually late.” 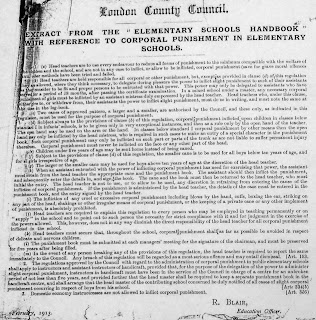 In England and Wales children were given corporal punishment up until the 1970s. We have the St Peter’s School Punishment Book from 1906 to 1962 which details all the corporal punishment meted out to children in school. New regulations were drawn up by the London County Council in 1905, and these had to be strictly adhered to. Teachers were not allowed to box children’s ears, cuff them round the head, shake them or make blows with the hand. A cane had to be used as the instrument of punishment, except in the Infants School, where a slap was thought to be sufficient.
Generally the Head dealt out the punishment himself, or delegated the task to another teacher. A cane was kept in the Headmaster’s office with the Punishment Book. After inflicting the punishment, sometimes as many as four strokes but usually two, the cane and book had to be returned to the Headmaster. Contrary to popular belief teachers did not have their own individual canes.
Eleven year old William Bond has the ignominy of being the first child to have his name recorded in the St Peter’s Punishment Book. Four strokes from Mr Down for “Talking and lying.” 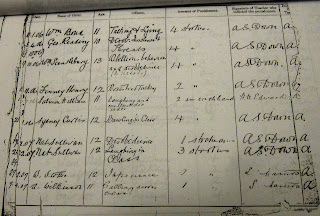